A quick introduction to pyrheliometer basics

This article gives a reader with a basic level technical background an introduction to pyrheliometers and the measurement of direct irradiance.

Read the full article here: What is a pyrheliometer? - a quick introduction - note (PDF)

A pyrheliometer is a device that measures solar irradiance coming directly from the sun. The SI units of irradiance are watts per square metre (W/m²). Traditionally pyrheliometers were mainly used for climatological research and weather monitoring purposes, however recent worldwide interest in solar energy has also led to an increased interest in pyrheliometers. In this article we will explore the basic aspects of a pyrheliometer: what does it measure; what is it useful for; and how does it work?

Figure 1 A pyrheliometer is pointed at the sun to measure the solar irradiance coming directly from the sun.

Pyrheliometers measure ‘direct solar radiation’ E: the amount of solar energy per unit area per unit time incident on a plane normal to the position of the sun in the sky, coming directly from the sun itself. This is also called ‘direct normal irradiance’, often abbreviated to DNI. A pyrheliometer needs to be mounted on a solar tracker: a device that points the instrument at the sun throughout the day. See Box 1.

This direct radiation E, together with diffuse radiation Ed, gives the total available amount of solar energy on the Earth’s surface, the global irradiance Eg↓

where θ is the angle between the surface normal and the position of the sun in the sky.

To limit the measurement to the radiation coming only directly from the sun, it is necessary to limit the field of view of the instrument. From outside the earth atmosphere, the sun is seen as a disk with an angular distance of about 0.27 °. At ground level, the sun looks a lot bigger. Its visual size depends on the atmosphere: the hazier the sky, the bigger the sun in the sky.

Per WMO (World Meteorological Organisation) convention, all modern pyrheliometers use the same field of view, characterised by a opening half-angle of 2.5 °. This means the measurement of direct solar radiation includes some ‘circumsolar’ radiation.

Direct solar radiation varies greatly depending on the height of the sun in the sky (and thus location on the earth, time of day and time of year) and on meteorological and environmental factors such as clouds, aerosols, smog, fog, precipitation and others. Typical values for the direct solar irradiance are in the range from 0 to the theoretical maximum of the solar constant, about 1361 W/m².

What are pyrheliometers used for?

The sun is earth’s main source of extra-terrestrial energy. This has important implications in two areas: weather and climate on the one hand and energy production by harvesting solar energy on the other hand.

Solar radiation is one of the driving forces behind the earth’s weather patterns and thus an important factor in weather and climate studies. In such studies pyrheliometers are often combined with pyranometers to measure all components of the solar radiation; direct, global and diffuse.

Modern pyranometers, such as models SR25 and SR30, with low zero offsets and near-perfect directional responses, render this argument invalid. However, separate measurements of direct, diffuse and global radiation are still the norm in high-accuracy installation such as in the Baseline Surface Radiation Network (BSRN). Measuring all three components allow to check for internal consistency by comparing the global radiation to the ‘back-calculated’ global radiation from direct and diffuse.

For PV installations that use concentrated sunlight, monitoring the direct solar radiation is necessary to ensure proper operation of the plant.

Finally, a pyrheliometer provides the most accurate method of measuring sunshine duration. The World Meteorological Organisation, WMO, defines sunshine hours as “the sum of the time intervals (in hours) during which the direct normal solar irradiance exceeds a threshold of 120 W/m²”. 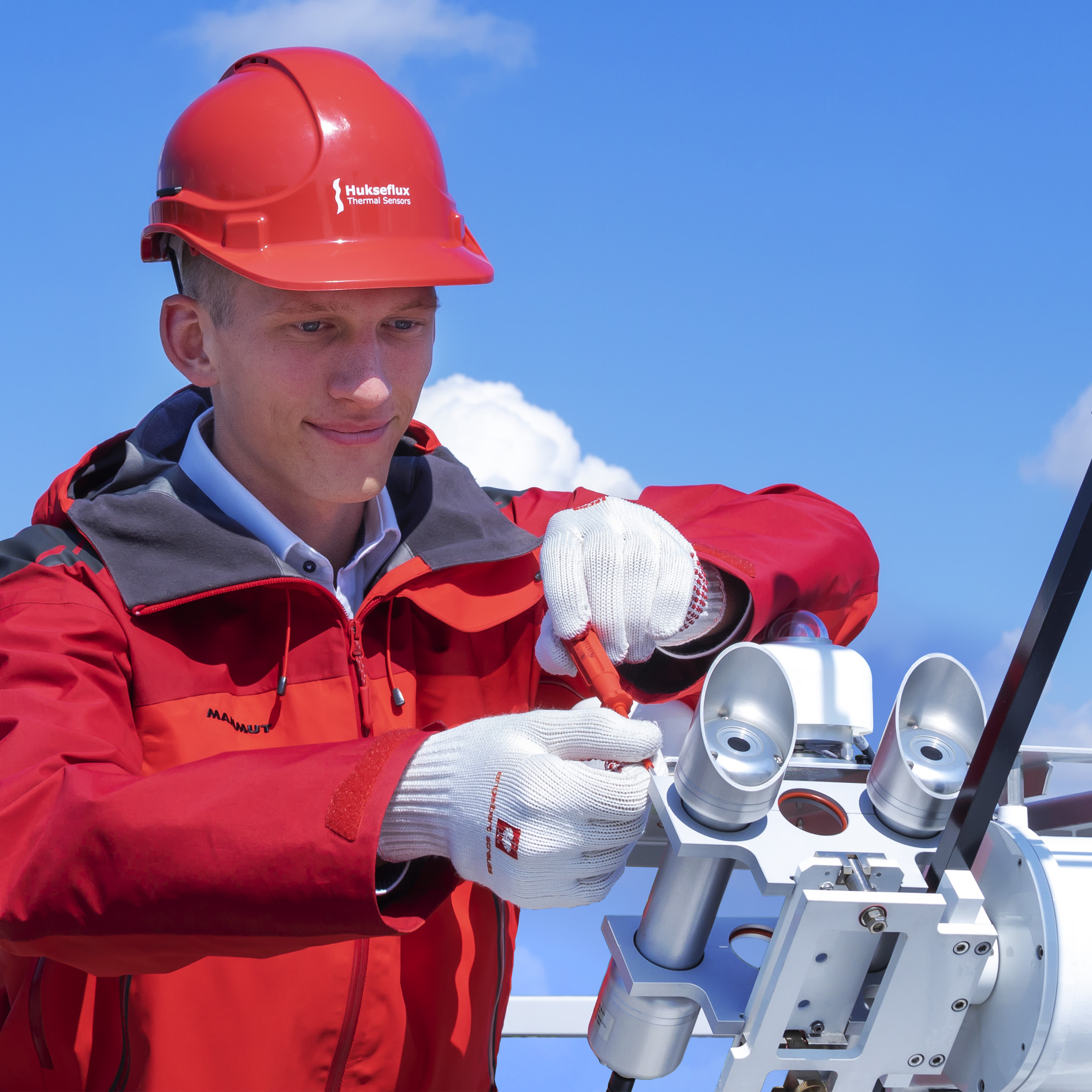 How does a pyrheliometer work?

Pyrheliometers are irradiance sensors that incorporate thermopiles: sensors based on the Seebeck- or thermoelectric effect. The main components of a pyrheliometer are a quartz window, a black absorber, a thermopile, the pyrheliometer tube which defines the field of view and in some cases additional electronics. Sights are included to enable the instrument to be pointed correctly.

The transmission τ of solar radiation through a window is ideally close to 100 %, but is in practice closer to 95 %. The window also serves to protect the black absorber and the thermopile from the elements (rain, snow, etc.).

This creates a temperature gradient from the black surface through the thermopile to the pyrheliometer body which acts as a heatsink. The temperature difference is given by:

What is a pyrheliometer? - a quick introduction - note (PDF)